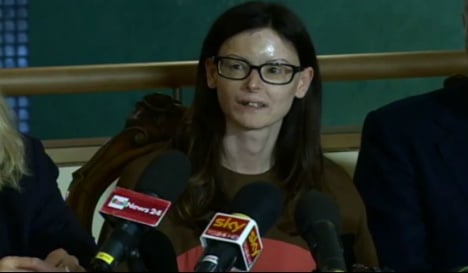 Lucia Annibali, whose scarred face became the symbol of the fight against femicide and violence against women in Italy, said she was happy with the verdict but "nothing can pay me back for what I've been through."

Luca Varani, 37, was found guilty of ordering the attack on Annibali after she discovered he was about to father a child with another woman and left him.

He had initially denied having anything to do with the attack, but later admitted asking two Albanians to throw acid on Annibali's car in what he told the court was an "odious joke" which went wrong.

Albanians Rubin Talaban and Altistin Precetaj were sentenced to 14 years each for the April 2013 assault.

Varani, who was arrested the day after the attack as he attempted to flee to the United States, had previously tried to hurt his former girlfriend by tampering with the gas cooker in her home, Italian media reports said.

Annibali, who has undergone seven surgical operations on her face, was awarded an Order of Merit by President Giorgio Napolitano in November and has become the pin-up for a campaign to stop violence against women.

Italy's speaker of the lower house Laura Boldrini, herself a victim of verbal attacks including rape threats, praised Annibali for her "extraordinary courage" after the verdict.

"Lucia's face and words have made a fundamental contribution to our fight. Many women, thanks to her example, are shaking off their silence to reaffirm that gender violence, when it takes place inside the home, is never private," she said.

Italy adopted measures last year to crack down on an escalating number of attacks by husbands and lovers and became the fifth Council of Europe member state to ratify the 2011 Istanbul Convention, a treaty combating such violence.

According to the national statistics institute, 124 women were killed in 2012 and a third of all women in Italy are victims at some point of domestic violence.