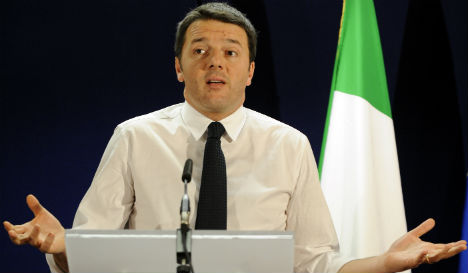 Government-controlled companies will now have top pay capped at the same level as the head of Italy's top court as part of Renzi's promise to cut back spending without further hurting the economy.

Chief executives at companies, including the Motorway agency ANAS and RAI state television, will now see their pay capped at €311,000 a year ($425,000), when the decree comes into force on April 1st.

However, public companies floated on the stock exchange or that raise debt through bonds, will be exempt from the rule, leaving out major groups like oil giant ENI, transport group Finmeccanica and the national post office.

The decision comes in the wake of a public outcry over the salary paid to the head of the public rail company, €900,000 a year, and the chief executive of the post office, whose annual pay exceeds €2.2 million.

While both those companies are not affected by the rule, the government said it was encouraging exempt state companies to make similar rulings at any upcoming shareholder meetings.

Renzi, the country's youngest ever Prime Minister, has vowed to radically overhaul the way Italy is governed and drag its stagnant economy out of the longest recession since World War II.