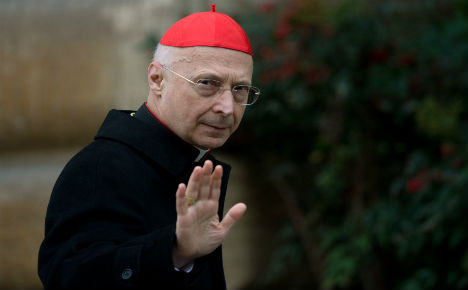 Italian cardinal Angelo Bagnasco arrives for a meeting on the eve of the start of a conclave on March 11, 2013 at the Vatican. AFP Photo/Johannes Eisele

"The Vatican requires national laws to be respected, and we know that there is no such duty (to report abuse) under Italian law," Cardinal Angelo Bagnasco, head of the Italian Bishops' Conference, told reporters on the sidelines of a meeting in Genoa.

The conference published guidelines on Friday which stipulated that clergy are under no obligation to inform the authorities about suspected abuse but have a "moral duty" to act to protect the vulnerable and "contribute to the common good".

The guidelines sparked fury among victim support groups, with the US-based Survivors Network of Those Abused by Priests (SNAP) deploring the "stunning, depressing and irresponsible contradiction between what Vatican officials say about abuse, and do about abuse."

The Church has repeatedly been accused by victims of covering up abuse by priests and simply moving predator clerics from one diocese to another rather than reporting them, thereby putting other children at risk.

Bishops in possession of information on possible abuse cases have been required by the Vatican to report to the authorities since 2010, but only in those countries where they are required to do so under national law.

Bagnasco said the decision to adopt the Vatican's policy had been taken in part to protect victims who may not want to press charges.

"What is important is to respect the will of the victims and their relatives, who may not want to report the abuse, for personal reasons," Bagnasco said.

"We need to be careful that we in the clergy do not undermine the right to privacy, discretion and confidentiality, and the right of the victims to not be 'exposed' in the public square", he said.

The Vatican was denounced by the UN Committee on the Rights of the Child in February for failing to stamp out predatory priests, and urged to hand over suspected abusers for prosecution.

Pope Francis has defended the Church, saying it has done more than "any other institution" in tackling paedophilia, and last weekend he appointed a woman who had been molested by a priest as a child as part of a new commission on fighting clerical sexual abuse.