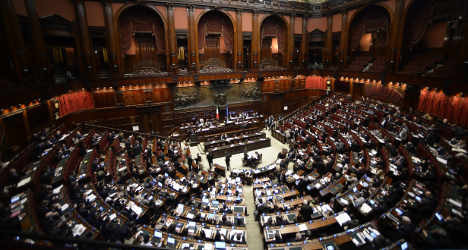 Italy's cabinet has adopted a draft bill to reform the Senate. Photo: AFP

"The moment has arrived for politicians to make sacrifices," Prime Minister Matteo Renzi told a press conference as he unveiled his plan to do away with the splintered, complicated system which has fuelled Italy's unstable political situation and blocked reforms.

Renzi made changing the Senate's status a keystone of his programme when he came to power in February, and has said that without it Italy risks seeing successive governments thwarted on policies essential to the recovery of the eurozone's third largest economy.

Under the current system, legislation must go before the lower and upper houses of parliaments which have equal powers, but a fiendish electoral process means parties struggle to ensure a majority in both – resulting in huge delays while draft bills go back and forth.

The bill would transform the Senate: it would lose its power to hold votes of no-confidence and deputies would no longer be elected, helping cut exorbitant costs tied up in the political apparatus.

Renzi's right-hand man Graziano Delrio said in an interview Sunday that the current system was "baroque" and the new one would be styled on Germany's Bundesrat, "working only on those bills which concern the constitution, local administration, Europe."

The 39-year-old premier said the debate over how to tackle the senate had been going on for decades, but the time for change was now.

"We have done amazing work, I was in the nursery when it all began. After years in which politicians have chattered, the moment has finally arrived to give something back to the families," he said.

For all his sense of urgency, the draft bill is not expected to be approved before next summer: not only will it require senators voting to get rid of their own jobs, it will also entail a change to the constitution.