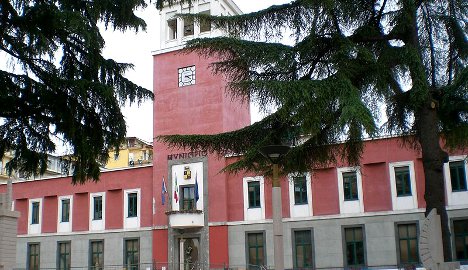 The businessman threatened to set himself on fire inside the Battipaglia town hall. Photo: Freed73/Wikimedia Commons

The 52-year-old businessman walked into the town hall in Battipaglia, in the Campania region, and threatened to set himself on fire. There were “tense moments” in the council lobby as staff tried to talk him down, police said in a statement.

He was convinced to give up his protest after the council’s financial department assured him they would pay out €23,000 owed for dog catching in the town.

The businessman’s threat on Thursday was the latest bid to get the government to pay its bill, after chaining himself to the town hall a few months ago.

The Italian government owes an estimated €68 billion to private suppliers, a bill Prime Minister Matteo Renzi has promised to clear by the end of the summer.

There have been a number of self-immolations or threats to do so by people in Italy in recent months.

In February, a restaurant owner in northern Italy set himself on fire, while two weeks previously two men had threatened the same action at the Vatican. In December, two men died from their wound after setting themselves on fire in separate incidents.

READ MORE: Italian protesters try to set themselves on fire