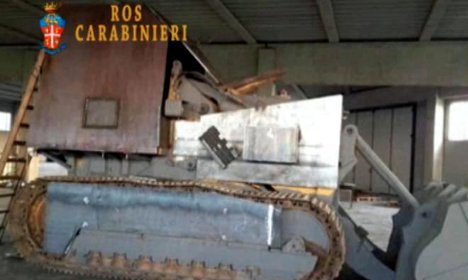 The group allegedly converted a digger into a tank, which they planned to use to attack Venice. Photo: ROS Carabinieri

The group of 24 were arrested on terrorism charges over a plot to use their homemade tank, nicknamed “Tanko”, along with machine guns and dynamite, for “a spectacular action on St Mark’s Square,” police said in a statement.

In a scene reminiscent of the film Mad Max, police footage showed people apparently welding metal sheets onto a Fiat-Allis digger to transform it into a weapon of war.

They had reportedly fired blanks from “Tanko” in a warehouse south of Venice and were due to add a gun turret.

News reports also quoted wiretapped conversations in which the suspects discuss their weaponry.

"There'll be 800 of us. Well equipped, with gas masks. Some of us with machine guns and there will be people from abroad too," one is heard saying.

In other wiretaps, a suspect was reported referring to "sticks of dynamite" and saying: "We're going to install a real climate of fear. It's going to be fun".

The group named as “The Alliance” planned to “liberate” St Mark’s Square and set up a new independent government, separating from Italy.

There is broad support among locals for establishing Venice’s Veneto region as an independent state, although the radical separatists’ violent means could see them face up to 15 years in prison.