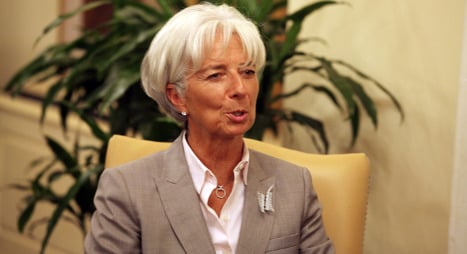 In an interview with the Italian daily Corriere della Sera, Christine Lagarde said that compared to other European countries, Italy has done the least in encouraging women to work.

“A change of strategy is needed,” she added, saying that not only would it help the country advance socially, but the additional salary generation would help it emerge from economic stagnation.

Only about half of Italian women are in the workforce, compared with an EU average of 62 percent, according to Eurostat figures from 2012. At 76.8 percent, Sweden had the highest rate of working women, followed by Switzerland with 76 percent.

Lagarde pointed to countries such as Japan, whose economy she says has been given a boost since Prime Minister Shinzō Abe created a network of childcare facilities to enable mothers to work.

She also said the Netherlands, where 71.9 percent of women work, has been "very successful" in adopting  "flexible part-time" work incentives for women, while South Korea is moving in a similar direction.

The comments come a few days after Lagarde told a US radio station that the financial crisis would never have happened if women had been in charge.

She said women “have different ways of taking risks” and make fewer snap decisions than men.

In the interview with Corriere, Lagarde also said the new Italian premier Matteo Renzi’s plans were “ambitious” but needed “firmness.”