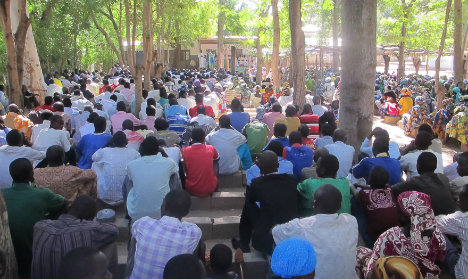 Mass for French priest Georges Vandenbeusch, who was kidnapped in the same region in 2013. Photo: Reinner Kaze/AFP

The attack occurred overnight in the north of the west African country, which borders violence-wracked Nigeria, according to Italy's Ansa news agency.

The Italian foreign ministry said that two priests from Italy's northern Vicenza region had been seized, but gave no other details.

Armed gunmen pulled up to the buildings where the priests and the nun were staying around 2am and ransacked them before taking the hostages, added the Ansa news agency.

Italian daily Corriere della Sera reported on its website that the victims were staying in the northern Maroua region, which borders the part of northern Nigeria that's a stronghold of the Boko Haram Islamist group.

The attack comes three months after the release of French priest Georges Vandenbeusch, who was kidnapped in the same region in mid-November 2013 and then held in neighbouring Nigeria by Boko Haram.

One of the two priests taken on Friday night had been in Cameroon for more than six years while the second had arrived around a year ago, Ansa reported.

Authorities in Vincenza, where the priests were from, were not immediately available for comment.