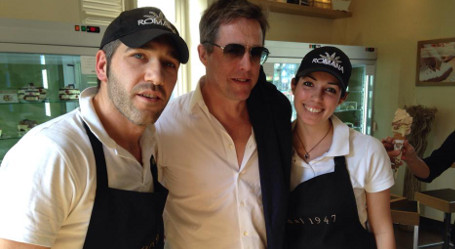 “It’s true! We couldn’t believe it when he came in,” Perluigi said.

“He was taking a stroll and stopped for something to eat with a woman friend, she must have been about 35.”

Grant, famous for his roles in Notting Hill and Four Weddings and a Funeral, ordered pasta Bolognese and a salad and stayed for about half an hour, Perluigi added.

He then walked across Piazza Martiri to Gelataria Romana Rivoli, where he bought a Mascarpone mousse with coffee and chocolate chips and a Pistachio-flavoured ice-cream.

“He said the ice-cream was very good!”, Tamara, a staff member, told The Local.

She added that Grant was “a gentleman” who happily posed for photographs, which were immediately posted on the shop’s Facebook page.

Though staff speculated over why he was in Turin, and who his mystery friend was, they didn’t dare to inquire.

Police ruled out that he was in the city to make a film. “We would have known about it,” an officer was quoted in La Stampa as saying.

This was the first time a famous foreign customer had called in at Gelataria Romana Rivoli, although staff there are used to serving the Juventus and Italy football player, Sebastian Giovinco, Tamara said.

“He lives in the neighbourhood and comes with his wife about once a week.”