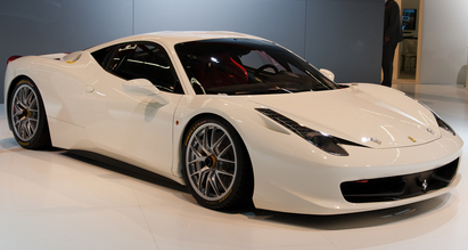 The white Ferrari 458 attracted the attention of passersby on Saturday while parked on the capital’s busy Via del Corso, Corriere della Sera reported.

Car enthusiasts began posting photographs of the Italian sports car on Twitter, unexpectedly alerting the police who arrived ready to tow it away.

“We will try to remove it, but it’s a bit off the scale,” traffic police chief Raffaele Clemente wrote on Twitter, posting another message saying his team was greeted with applause by shoppers.

But in the end traffic police opted for clamping the Ferrari, finding a “big enough set of jaws”, he said.

SEE ALSO: In pictures – How to park like an Italian

The driver of the sports car, reportedly with United Arab Emirates number plates, was said to be apologetic on discovering the commotion his bad parking had caused.

“The owner has paid the fine and apologized,” Clemente said in a running commentary of the Ferrari incident. The fine amounted to €41, Corriere said.