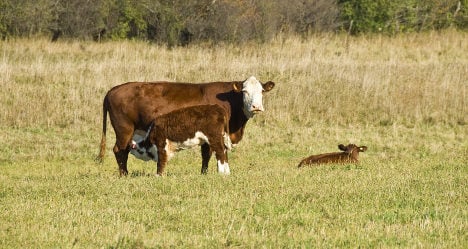 The baby cow, named Polifemo, was born 20 days ago with a third eye on its forehead, Huffington Post Italia reported on Tuesday.

The malformation has baffled the calf's owner, who has pledged to take care of the animal. A vet, Giuseppe Bruno, said the extra eye was likely to have formed during the embryonic stage.

The calf is unable to see through the third eye, Il Giornale reported.

The breeder has asked to remain anonymous in order not to “alarm people” and avoid the risk of information being distorted, the website Gizzeriaonline reported.

Though there have been cases of animals born with long legs and arms and even whales born with two heads and two tails, this is the first known case of an animal being born with three eyes in Italy, news site Centrometeoitaliano said.

But it has happened elsewhere. In 2011, a calf in US state Vermont was born not only with four eyes, but also two heads and two snouts, though it only had one brain.

Vets explained that the calf, born "perfectly healthy", was supposed to be a twin but the egg did not separate properly.

A year later in Kenya, a cow gave birth to a calf with two heads, three ears and four eyes.

And two years ago in Switzerland, a calf called Lilli was born with six legs.