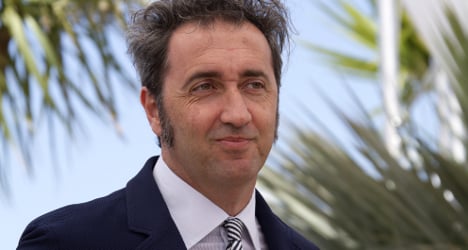 The name of the actor who will play the Catholic leader in the eight-part 50-minute series has not been revealed but the plot will reportedly play out in the Vatican, as well as Africa, Italy and the United States.

Sorrentino won the Oscar for best foreign film this year for The Great Beauty (La Grande Bellezza), a magical romp through a Roman dreamscape and a tribute to Italian master Federico Fellini's La Dolce Vita.

"Paolo Sorrentino has chosen us for his first television story," Andrea Scrosati, Sky's vice president for cinema, entertainment and news, was quoted by the Corriere della Sera as saying.

The series will be produced by Italy's Wildside, whose co-founder Lorenzo Mieli told Corriere that Sorrentino's foray into television was a key step for the industry in Italy on the international stage.

Contacted by AFP, press officers for Sky and Wildside were not immediately able to respond to questions about the report.

Mieli compared the pope character invented by Sorrentino to the complexity of other television protagonists like Tony Soprano in The Sopranos, Walter White in Breaking Bad or Frank Underwood in House of Cards.

"These are characters described in their bipolarity and the plot develops horizontally. That is the only way you can create an affection for their faces and understand their conflicts, comprehend their fears.

"The pope invented by Sorrentino is someone you have to meet at least once in your life," Mieli said.