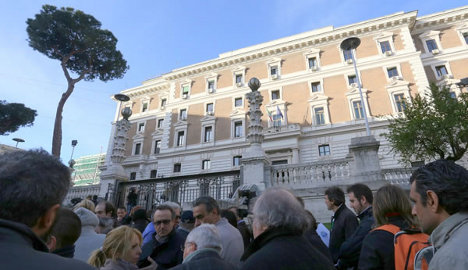 Would-be MEPs had until Monday afternoon to submit their chosen symbols to Italy’s Interior Ministry, marking the first stage in the run-up to the May 25th elections.

Italian politicians have in recent weeks grappled to come up with the most appealing party logos to attract voters. Prime Minister Matteo Renzi, secretary of the Democratic Party (PD), chose not to lend his name to the campaign and opted for a classic party symbol.

Forza Italia, Italy’s second-largest party, has proudly displayed the name of their leader Silvio Berlusconi, despite the politician being banned from becoming a candidate due to a criminal conviction.

More than 60 symbols were submitted in total, according to Italian media, and included an eclectic mix of mainstream parties and less well-known groups.

Of the smaller political hopefuls, the “I don’t vote” logo appeared most likely to experience an election flop. Others went for clear policy messages, with one logo reading simply: “Basta €uro” (“Enough of the euro”).

Perhaps the most unusual logo of the political hopefuls came from the South American Union of Italian Emigrants (USEI Unione Sudamericana Emigrati Italiani).

The political group chose to express their support for football team Juventus, declaring “Forza Juve” (“Go Juve”), with a stick man – who could double up as a football player – kicking the euro symbol.

The parties who presented symbols now have a week to come up with their candidate lists, which need to be submitted next Tuesday and Wednesday.

Those which qualify will then go on to compete in the May elections, in which 751 MEPs will be chosen from across the EU.

Italians will elect 73 politicians to sit in the European Parliament, making it the joint-third largest national bloc, along with the UK, behind Germany and France. Following the elections, Italy will take over the rotating presidency of the EU, for a sixth-month term starting on July 1st.