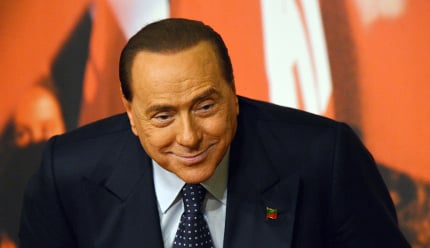 Silvio Berlusconi will find out on Thursday whether he will do community service or be put under house arrest for a tax-fraud conviction. Photo: Gabriel Buoys/AFP

The court in Milan has to issue its ruling by April 15th, deciding whether the disgraced billionaire tycoon will do community service or be placed under house arrest following a conviction for tax fraud from last year.

The court appointment is a further humiliation for Berlusconi, who has already been expelled from parliament over his conviction and is banned from standing as a candidate in elections for six years.

The hearing in Milan is due to start at 1500 GMT and Berlusconi's presence cannot be excluded, although he most often skips his many court appointments as defendants in Italy are not compelled to attend.

Following court procedure for this type of post-sentencing hearing, it will be preceded on the same day by around 50 other cases for convicts whose surnames also begin with "B", Italian media reported.

Among the cases being heard on the same day are those of a drug addict asking to be released from house arrest and a Senegalese migrant appealing against deportation order, Italian media reported.

Berlusconi has also received a visit from a social worker at his sprawling mansion outside Milan as part of legal procedures ahead of the court hearing, which will be followed by more visits in the months to come.

The ruling will come at a critical time for Berlusconi on the political front ahead of European elections next month as he remains the figurehead leader and main force behind Italy's top centre-right party.

His Forza Italia group has fallen behind in the opinion polls faced with a resurgent centre-left under Prime Minister Matteo Renzi but under normal conditions Berlusconi would still be a formidable rival.

Berlusconi was sentenced to a year's prison for the fraud, which involves the sale and purchase of film distribution rights by his business empire Mediaset.

But the 77-year-old politician will not have to go to prison because of the leniency shown in Italian courts to over-70s who are convicted of non-violent crimes.

The sentence is also highly likely to be further reduced for good behaviour to less than a year.

Experts say it is most probable the court will decide for community service since this is Berlusconi's first definitive conviction despite more than 20 years of legal tussles that he says show judicial prejudice.

Community service could involve working in a non-governmental organisation or religious charity and a long series of publicity-seeking charities have already signalled their readiness to take him in.

The latest media reports say that the Milan office in charge of the execution of sentences has put in a request to the court that Berlusconi work in an old person's home outside Milan for one day a week.

The conditions are easier than house arrest but Berlusconi will still have to respect a curfew and will be banned from meeting other people with criminal convictions, which includes at least one close friend.

There will also be some limits on his movements.

Under normal rules he would not be allowed to leave the borders of the Lombardy region where Milan is and will have to seek a special exemption for example if he wants to travel to Rome for political engagements.

"If he gets community service then that might take another month or two to implement," a source close to Berlusconi's defence said.

Berlusconi claims total innocence of any crime that he has ever been charged with and regularly accuses a large part of the Italian judiciary of ganging up against him because of a leftist political bias..

He is currently involved in two other court cases.

In an trial set to start on June 20th, he will appeal a seven-year prison sentence and lifetime ban from parliament for having sex with an underage 17-year-old prostitute and abusing his official powers.

He is also a defendant in a trial for allegedly paying a €3 million bribe to get a senator to join his party's ranks in 2006 in a move that helped bring down a rival centre-left government.