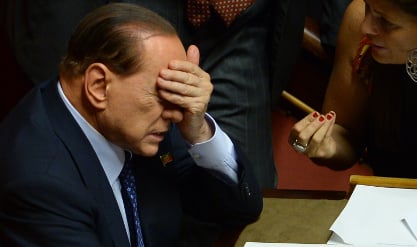 Silvio Berlusconi could be forced to do community service for nine months. Photo: Filippo Monteforte/AFP

The move came during a hearing for the billionaire tycoon in Milan that lasted nearly two hours. A spell of community service will likely spare him house arrest but a final ruling is due in the coming days.

Berlusconi himself was not present for the hearing, while stock in his Mediaset business empire fell sharply by 3.1 percent to four euros a share.

A small group of supporters from Berlusconi's Forza Italia party also rallied outside his villa in Arcore near Milan, where Italian media said the media magnate was holed up with his family and his personal doctor.

Judge Pasquale Nobile De Santis told reporters that his final ruling would be announced "in a minimum of five and a maximum of 15 days" once the decision is formally registered by the court and Berlusconi is notified.

The 77-year-old has been sentenced to a year's prison but will avoid jail time because of leniency for over-70s in Italy, and the period is likely to be further reduced to nine months for good behaviour.

Italian media said Berlusconi's lawyers have requested that he be assigned to work one day a week in a centre for physically and mentally disabled people near Arcore.

La Stampa quoted his lawyers as saying that Berlusconi would be able to "give hope" to the disabled. It said the centre had not yet been created and that the media magnate "could in fact be its patron".

"He would be able to show off his relentless optimism and use it for the campaign" ahead of European Parliament elections in May, La Stampa said.

Thursday's court hearing is a further humiliation for Berlusconi, who has already been expelled from parliament over his conviction and is banned from standing as a candidate in elections for six years.

He remains the figurehead and main force behind Italy's centre-right party, Forza Italia, which has fallen behind in the polls but could still be a major player in Italy with Berlusconi's campaign skills.

"Berlusconi is a symbol and you don't impede or silence or block a symbol," said Renato Brunetta, leader of Forza Italia in the lower house of parliament.

"Think of Aung San Suu Kyi who was under house arrest and became a global symbol. When you try to shut them up or block them, they become even stronger," he said.

Experts said it is probable the court will decide for community service since this is Berlusconi's first definitive conviction despite more than 20 years of legal tussles that he has blamed on political bias in the judiciary.

The conditions are easier than house arrest but Berlusconi will still have to respect a curfew and will be banned from meeting other people with criminal convictions, which includes at least one close friend.

There will also be some limits on his movements. Under normal rules he would not be allowed to leave the borders of the Lombardy region, of which Milan is the capital, and will have to seek a special exemption if he wants to travel to Rome for political engagements.

Berlusconi claims total innocence of any crime he has ever been charged with and regularly accuses a large part of the Italian judiciary of ganging up against him because of a leftist political bias.

He is currently involved in two other court cases. In a trial set to start on June 20th, he will appeal a seven-year prison sentence and lifetime ban from parliament for having sex with an underage 17-year-old prostitute and abusing his official powers.

He is also a defendant in a trial for allegedly paying a three-million euro bribe to get a senator to join his party in 2006 in a move that helped bring down a rival centre-left government.