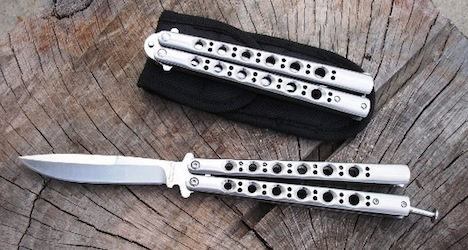 The weapon is thought to have been a so-called butterfly knife. Photo: Wikicommons

The teen, a student of a Lausanne high school, died late on Tuesday night from a single wound inflicted in the room of a guest house near the Vatican, according the results of an autopsy released on Thursday night, Swiss broadcaster RTS reported.

But the circumstances of his death, initially reported by Italian media as the result of a knife game between friends, remain unclear.

The autopsy showed the knife cut through the victim’s chest to the oesophagus and the aorta.

He also suffered a wound to the head, the results showed, RTS said.

Italian media have reported that investigators obtained different versions of what happened from classmates, including two students sharing a room with the victim.

A knife game, an accident or a skirmish in the room?

The Corriere della Sera newspaper said police have heard the three different versions from other students.

The newspaper said investigators have not ruled out entirely the possibility of homicide, noting that the knife was found outside the room in the guest house run by nuns where the boy was fatally injured.

Another Italian newspaper, Il Messagero, said the weapon was a so-called butterfly knife, which has a folding handle, which is illegal in Switzerland.

The newspaper said two other similar knives were found in the room where the victim was staying.

The Lausanne newspaper 24 heures reported that students at the victim’s school, the Collège secondaire de l’Elysée, were in shock over the death.

The teen was popular in the school, where he was known for creating a series of sketches and parodies on YouTube and attracting several thousand followers on Instagram.

He was with a group of 20 students, accompanied by three teachers, on a “study-trip” in Rome that began on Monday.