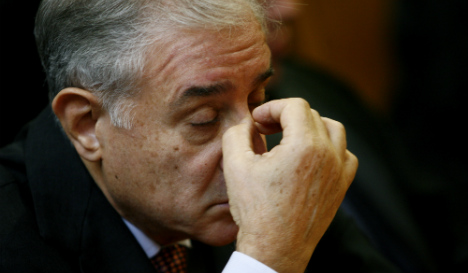 The news came the day after the anti-mafia prosecutor's office said a warrant for Marcello Dell'Utri had been issued on Tuesday but that he was "unreachable".

Dell'Utri himself had issued a statement in which he did not reveal where he was but said that he had "no intention" of escaping arrest and was undergoing medical checks because of poor health.

His disappearance had caused outrage in the political world, with far-leftist and former prosecutor Ignazio Ingroia saying that "allowing Dell'Utri to flee abroad was shameful and indecent for a civilised country".

A senior Lebanese official told AFP that "an Italian citizen was arrested in a Beirut hotel", without naming him.

Alfano said it would be "natural and logical" for Dell'Utri to extradited to Rome.

The legal case against Dell'Utri has dragged on for two decades and is headed for a definitive ruling from the Supreme Court on April 15th after multiple appeals.

Prosecutors said they ordered his arrest this week because Dell'Utri, who has been a free man despite his trials, was only recently considered a flight risk.

Dell'Utri, 72, headed up the advertising arm of disgraced former prime minister Berlusconi's media business empire and helped his political debut with the foundation of the Forza Italia (Go Italy) party in the early 1990s.

He faces a seven-year sentence for ties to the Sicilian Mafia. He was notably accused of serving as a mediator between Berlusconi and the mafia.