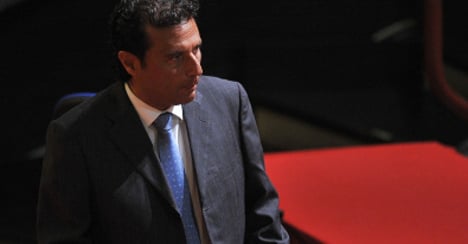 Francesco Schettino, the 53-year-old ex-captain of the ship, was heard giving the description in a telephone conversation recorded by the bridge's "black box" ten minutes after impact which was played out in the Rome court hosting his trial.

In fact, the Costa Concordia was slashed open 50 metres (160 feet) along its submerged hull by a rock shelf just off Italy's Giglio Island, causing it to list, then quickly capsize in a January 13th, 2012 tragedy that killed 32 people.

The ship, carrying 4,229 people from more than 70 countries, had been sailing very close to the island in a risky "salute" manouevre.

Schettino, who denies multiple murder charges, says he slipped and fell into a lifeboat, then stayed ashore despite exhortations from a coast guard official to get back on board. He denies abandoning ship.

He has been on trial since July last year.

On Monday, the director of the cruise ship company's crisis unit that handled the disaster, Roberto Ferrarini, said Schettino was only delivering information "in drips" and "in the third call, the captain assured me the ship was not sinking".

"By the fourth (call), I understood that the information he had was fragmentary and he needed to have everything confirmed by his officers."

Ferrarini testified that Schettino also tried to persuade him to help concoct a joint version of events that was contrary to what happened.

"Schettino suggested saying to authorities that a general power outage on the ship was the cause of the collision. But I rejected that strongly, I even got angry."

Ferrarini and four others accused in the affair have plea-bargained, accepting guilt and being sentenced to less than three months in prison.

Schettino has refused to do likewise, preferring to go to trial.

The Costa Concordia's Indonesian helmsman, who Schettino's defence team is at least partly responsible for the disaster, is a fugitive and has not been found.