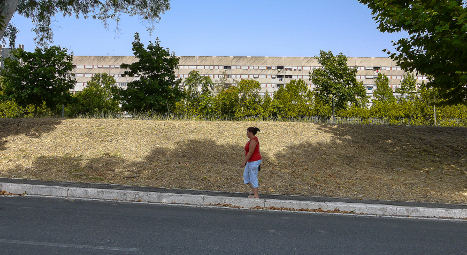 She was evicted from her home along with her two teenage children.

"All I want is to work," said the 44-year-old, as other families around her made up thin beds on the cold granite floor in a squat claimed this month.

"After years of sacrifice, not only have I lost the roof over my head, but I risk having my children taken from me as well," she said.

The state-owned insurance offices were taken over after standing abandoned for years, and 350 families have squeezed in together.

The lack of privacy and shared bathrooms are the price they pay for a roof over their heads.

Down in the courtyard, a motley mix of Italians, immigrants and refugees take it in turns to guard the gates from a possible police raid, while a group of boisterous young boys play with an old shopping trolley.

"They will have to take us away one by one, dragging us out, but knowing they're putting men, women and children on the street," said Cristiano Armati, 40, a member of the Coordinamento association that campaigns for housing rights and was behind the takeover of the building.

"The economic crisis has got to such a point that no one has been left untouched," he said, adding that an estimated 250,000 people in Rome are at risk of eviction or are living in destitute conditions.

Coordinamento has challenged centre-left Prime Minister Matteo Renzo over social issues and has brought thousands into the streets at recent rallies – the latest of which ended in violent clashes this weekend.

Italy's recession, the worst since World War II, has had a devastating effect on many ordinary Italians, squeezed hard by tax rises and an alarming unemployment rate, currently at a record 13 percent.

The country's traditional family support network has come under increasing strain, and rights groups say more should be done to turn the capital's unused public offices and empty army barracks into council houses.

Alessio Rossetti, a tattooed 32-year-old who used to work at Rome zoo before being laid off, says he was forced to join the squat after his parents said they could no longer provide for both him and his 10-year-old son.

"This is not a pleasant existence," he said.

"We live on top of one another, sleep little, eat little, and do exhausting guard shifts. But if Italy doesn't act to create more council houses and lower rent costs, we don't have much choice."

The government last month launched a new housing plan that promised to double rent subsidies for low earners to €200 million for 2014 and 2015, but it also cracked down on squatters' rights.

Critics say the subsidies are not enough and insist the government should do more to free up empty properties.

In the office block, off a busy road leading out of Rome to the sea, clothes hang out to dry on lines between windows, cooking and cleaning rotas have been set up and families take it in turns to look after children.

"It's not bad here but I miss my friends," said eight-year-old Miguel, bouncing a red rubber ball back and forth across his Smurf bedspread in the room he shares with his parents, uncle, sister and nephew.

Next door, Kenyan refugee Ruth, who declined to give her last name, said she had been given asylum by Italy but had been unable to get work despite her nursing qualification, forcing her to move into the squat with her husband and two-year-old daughter.

"We are struggling for survival. We have been promised we'll be protected, but are just glad now to have a roof over our heads," she said as she prepared a rice dinner on a camping stove.

"We have sleepless nights, but we hope for the best."