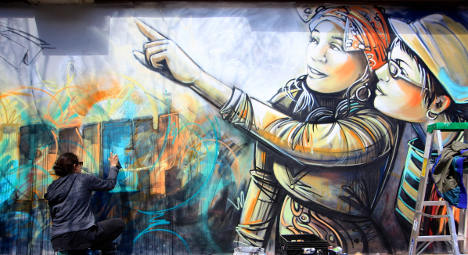 Pasquini, whose street signature is Alicè, has made a career out of street art, painting mixed-media pieces and large-scale murals over the past decade and on different continents.

“From Aways”, a horizontal mural painted on the side of local Rockaway Beach store, shows a glasses-wearing girl launching a paper airplane. Painted with Pasquini’s noteworthy vibrant colors and nostalgic imagery, Pasquini gives us a hint to a local journey, heading somewhere and going home.

The title plays on the name “The Rockaways”, Pasquini, referring to the neighborhood devastated by Hurricane Sandy, told The Local.

"After the hurricane, the feeling of abandonment is really strong," she added.

"I thought that the airplane contains a message of help and hope, starting from this wall – the side of an abandoned pizzeria – and arriving in Manhattan."

The mural is part of Beautify Earth’s “Beautify Rockaways”, which has organized mural painting, community cleans and a sculpture garden in the distressed neighborhood. Beautify Earth is a larger “ongoing community project dedicated to making the world a better place” by commissioning artists to create beautiful and thought-provoking murals in neglected or underdeveloped neighborhoods across the US.

“New Journey”, the second mural, continues the story on the other side of the Upper Bay in Jersey City. Reminiscent of a vintage postcard, the mural features second girl, who joins the original storyteller, and both watch as the paper airplane travels away. Pasquini worked with street art blog/curators Savage Habbit on this mural.