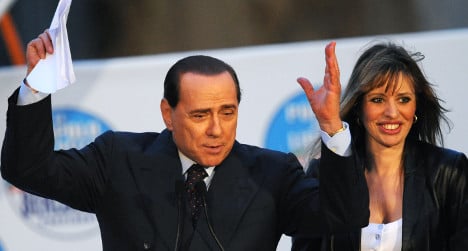 Mussolini, whose husband is currently embroiled in an investigation into underage prostitution, is among 30 women elected to vie in the May elections for Forza Italia, according to a candidate list published on Wednesday.

The former actress turned politician, who will represent central Italy, told La Repubblica newspaper on Thursday that she was “surprised” to hear of the candidacy but will "accept the challenge".

She added that she was happy that Berlusconi had confidence in her to help the party.

La Repubblica reported that Berlusconi, who earlier this week was sentenced to community service for a tax fraud conviction, called her to say the party “needed a strong woman”.

He is said to have been impressed by Mussolini’s strength, particularly during recent difficult times.

“You are a female role model who could be a great help,” he added.

Mussolini, 52, was previously a member of the European Parliament, for the right-wing Social Alternative party, between 2004 and 2008.