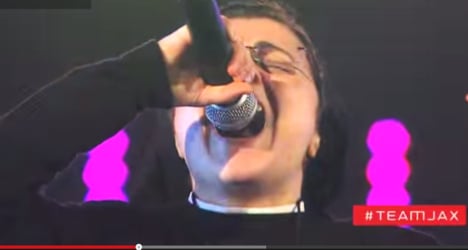 The nun was singing in a musical ‘battle’ between her and fellow contestant Luna Palumbo. Screengrab: YouTube/The Voice Italy

Appearing on Wednesday night on the reality TV talent show The Voice, Sister Cristina Scuccia – known simply as "Suor Cristina" in Italy – blew the audience away in a singing ‘battle’ between her and fellow contestant Luna Palumbo.

The choice of song may seem slightly unorthodox for a nun, but the 25-year-old certainly had no qualms as she belted out the 80s classic, cheered on by two enthusiastic nun supporters in the audience.

After the performance the judges gave their verdict on the performance with judge Raffaella Carrà complimenting the nun on her “stupendous energy” and another, singer-songwriter Noemi on the “spiritual dimension” she brought to the competition.

It was then up to the coach of the two singers, the Italian rapper J-Ax, to choose which one deserves to go through to the next round, the Live Show.

By Thursday afternoon the clip had already reached over 220,000 views on YouTube.

Last month the nun was catapulted to world fame when she sang at a blind audition on the show.

Scuccia impressed all four judges at the audition and chose J-Ax to be her musical mentor.

Since then the clip has clocked up over 45 million views on YouTube.

You can watch Suor Cristina's first performance below: