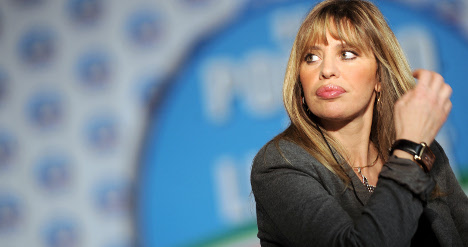 Who is Alessandra Mussolini?

In case the surname didn’t give it away, Alessandra Mussolini is primarily known as the granddaughter of Italy’s fascist dictator, Benito Mussolini.

Born in Rome in 1962, she is the daughter of his fourth son, Romano, and Anna Maria Scicolone, the sister of actress Sophia Loren.

And why is she in the news this week?

Mussolini has been picked to stand for Silvio Berlusconi’s Forza Italia party in the European elections at the end of May.

Berlusconi reportedly told her his party “needed a strong woman” and is said to have admired the way she coped with a recent scandal revolving around allegations that her husband, Mauro Floriani, was a client for teen prostitutes in Rome.

Tell us about Mussolini’s younger years.

With having Sophia Loren as an aunt, it was inevitable that she would at least dabble in the film industry.

In the 1970s, Loren took her niece under her wing, helping her to land roles in Italian films.

Contrary to her grandfather’s take on the Jewish community, Mussolini played a nun in The Assisi Underground, a film about the Catholic church rescuing Jews.

But her film career was cut short after she rowed with a director who insisted she change her surname.

Unperturbed, she then decided to become a singer, releasing an album of ballads in 1982. The album, however, was only released in Japan and is said to have since become something of a collectors item.

Mussolini was also a glamour model, posing for two Playboy covers in the 1980s.

“Every actress does topless and stuff like this; you have to,” she once said.

So she quit as an actress in defence of her surname. She doesn’t try to hide it then?

Not at all. Though the Mussolini name has a dark place in Italy’s history, carrying with it connotations of anti-Semitism and dictatorship, Alessandra is proud of her heritage.

She also cut ties with the right-wing National Alliance party in 2003 after its leader, Gianfranco Fini, attacked the Mussolini name, and fought for her children to be able to legally attach the surname to their father’s.

Has Mussolini herself been at the centre of any controversies?

One or two. In 2005, she was banned from taking part in regional elections for presenting fake signatures. Mussolini went on hunger strike to protest the decision, and instead blamed her former party, the National Alliance, for orchestrating the forgery scam. She was later allowed to participate in the elections.

She has also made some outrageous comments in the past. In response to a claim by the transgender politician Vladimir Luxuria that she was a ‘fascist’, Mussolini retorted: “It’s better to be a fascist than a faggot”.

When she was an MEP in 2007, Mussolini also sparked outrage after saying that all Romanians living in Italy were “criminals”.

So what has she achieved in politics?

Mussolini was elected to Parliament in 1992 as a member of the Italian Social Movement-National Right, which later became the National Alliance.

After leaving that party, Mussolini formed Social Action, and then a far-right coalition called Social Alternative, which was disbanded after the 2006 general election.

She then salvaged what was left of Social Action, and merged it with Berlusconi’s People of Freedom party.

Despite her right-wing leniencies, Mussolini, described as an outspoken feminist, has in the past taken “progressive” stances on issues such as abortion, gay rights and civil unions.

Within Berlusconi’s former People of Freedom party, she led the party’s “pro-immigrant” wing, and was often against some of the policies of Berlusconi's government.