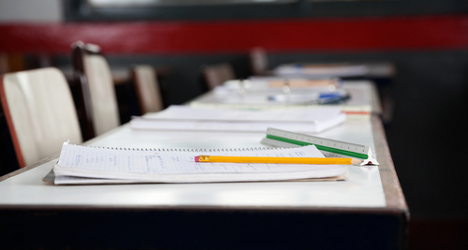 The school was closed for the Easter holidays when the man's body was found. School photo: Shutterstock

The body of Roberto Calenda, 45, was found at the middle school on Tuesday, Il Mattino reported. The school was at the time closed for the Easter holidays.

While investigators first thought the electrician had been murdered, following assessment by a coroner and police the case in now reportedly being treated as a suicide.

Police believe that Calenda could have been able to tie his own wrists together with elastic before hanging himself, in order to stop himself from having second thoughts.

Thought to be a drug addict, Calenda had previously attempted suicide. A suicide note was found in his pocket and there were no signs of violence on his body, although an autopsy has not yet been completed, Il Mattino said.