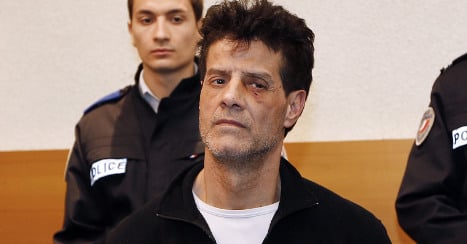 Serial killer Bartolomeo Gagliano is now back in Italy after escaping from prison in December. Photo: Valerie Hache/AFP

Gagliano, who killed two prostitutes and a transvestite in the 1980s, went on the run on December 17th and was caught three days later in Menton, a French town close to the Italian border, after Italian police launched a manhunt for a man they described as "very dangeous".

He was sentenced to ten years in prison by a Nice court on December 24th for possessing a gun and a false identity card but a French appeals court on Wednesday granted an extradition request from Italy, La Repubblica reported.

Gagliano now faces additional charges for escaping from prison, theft and kidnapping, with the penalties expected to be added to his other sentences.

Gagliano, nicknamed ‘Valentine's Day monster’ by the Italian press because he killed the transvestite on Valentine’s Day, spent many years in a criminal psychiatric ward for his crimes but was later transferred to Genoa's Marassi prison.

He escaped while on temporary leave to visit his mother – leave he had been granted for good behaviour.

Instead, he hijacked a bakery delivery van at gunpoint and told the driver to head to Genoa. Once there, he let the delivery man go and fled to France in a Fiat Panda.

Gagliano, who also escaped from a psychiatric hospital in 1989, was also serving time for attempted murder as well as robbery and the possession of drugs and weapons.