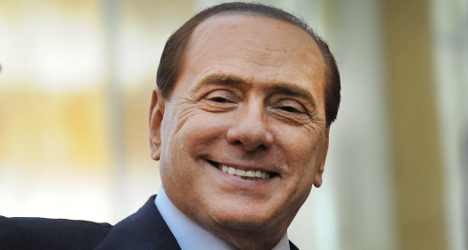 Silvio Berlusconi will work at an old people's home for one day a week. Photo: AFP

"I signed the document," the 77-year-old billionaire tycoon told crowds of journalists at a court office in Milan after finding out the details of his imminent community service in a Catholic Church-run old people's home.

The punishment is due to last around 10 months.

The rules he will have to adhere to include working at the home one day a week for at least four hours, as well as respecting a night-time curfew.

He will be allowed to leave his luxurious residence near Milan and travel to Rome to pursue his political activity only between Tuesdays and Thursdays.

Any other travel is severely curtailed and he cannot go abroad as his passport has been confiscated.

Berlusconi could spend his first day at the Fondazione Sacra Famiglia – a Church-run centre for disabled and elderly people with 2,000 patients in Milan's southwestern outskirts – on Monday, according to Italian media reports.

Berlusconi was sentenced last year for fraud relating to the purchase of television distribution rights by his Mediaset business empire in the 1990s.

He was spared prison time because of leniency in Italy for convicted over-70s and a court earlier decided he would not have to be held under house arrest.