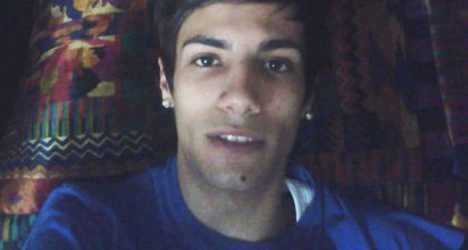 Joele Leotta was murdered six days after arriving in the UK. Photo: Facebook

Joele Leotta moved from Lombardy after finding work at an Italian restaurant in Maidstone, east of London. But six days after arriving last October he was beaten to death in his apartment, suffering 100 injuries, while his childhood friend Alex Galbiati was seriously injured.

Speaking in the Maidstone courtroom on Wednesday, where four Lithuanian men are on trial for the murder, Galbiati said he and Leotta had moved to the UK for "a work opportunity we could not find in Italy", Kent Online reported.

The pair were in their apartment above the Vesuvius restaurant, where they had started work just days earlier, when they were attacked on October 20th.

Prosecutors argue that the Lithuanian men, who were also living in the building, attacked Galbiati and Leotta as they wrongly believed that the Italians had complained about them, Kent Online said.

"Without bothering to find out the true state of affairs…They smashed down the door and attacked the two boys,” Prosecutor Philippa McAtasney was quoted as saying in court last week.

She said the Italians were "punched, kicked and hit with whatever came to hand", before Galbiati was able to phone the police.  It was a "senseless attack of brutal, drunken violence" in which he Leotta suffered 100 injuries, she added.

The case has caused shockwaves in Italy, as an increasing number of young people have sought to escape the country’s unemployment crisis by moving to the UK. According to statistics released by the UK government in December, the number of Italians registering to work there jumped by 52 percent over a year.

READ MORE: Surge in the number of Italians moving to the UK