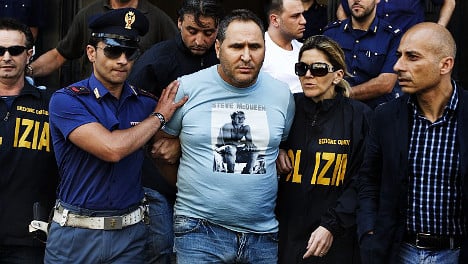 Cesare Pagano was convicted to life in prison for shooting dead 43-year-old Carmine Amoruso in 2006 in a bingo hall in Mugnano near Naples.

But according to his lawyer, the supergrasses who told investigators he had boasted about the murder at the time with friend Rito Calzone were lying — because Calzone was in Barcelona, with then Chelsea football coach Mourinho.

Pagano won the right to appeal his 2012 conviction based on plane tickets, hotel receipts and photographs showing Calzone posing with Mourinho and Chelsea players in the lobby of a hotel, a source in lawyer Luigi Senese's office told AFP.

Calzone's presence in the hotel at the same time as Mourinho and the Chelsea team was just a coincidence, she said.

In one photograph, Calzone is standing next to Mourinho, who is looking off to the side and giving a distracted thumbs up to the camera. In others, he stands in what looks like a hotel hallway with players Frankie Lampard, Hernan Crespo and Nuno Morais.

"According to the informers, Calzone was present following the murder in Naples and he and Pagano boasted that 'a just thing has been done'," the source said.

Though the man who gunned down Amoruso in the crowded bingo hall in front of 300 people had his face covered, the testimony sealed the guilty verdict against Pagano.

"But the photographs prove Calzone could not have been there, therefore the informers are lying," she added.

The receptionist who booked Calzone into the hotel has given testimony at the appeal, which is expected to reach a verdict in May.

Calzone had not told the court about being in Barcelona at the original trial because he had not been aware that it could exonerate Pagano.

"He was just there to see the match when he came across Mourinho. It turned out to be a very fortunate encounter," she said.