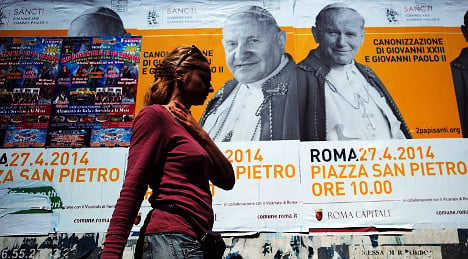 The double canonization of two of modern-day Catholicism's most influential figures will be presided over by Pope Francis and may be attended by his elderly predecessor Benedict XVI, bringing two living pontiffs together to celebrate two deceased predecessors.

Delegations from 54 countries are expected, including 24 heads of state, as well as hundreds of thousands from across the world who will be able to follow the ceremonies in different languages on 19 giant screens in some of the Italian capital's most picturesque spots.

Churches will remain open all night on Saturday for prayer vigils ahead of the mass in St Peter's Square on Sunday to honour two Roman Catholic leaders whose pontificates spanned from the height of the Cold War with the Cuban missile crisis to the fall of the Berlin wall.

Tapestry portraits of the new saints will hang high above the crowds and thousands of bishops, priests, and scarlet-cloaked cardinals.

A piece of John XXIII's skin, taken when his body was exhumed for his beatification in 2000, will be on show, alongside a vial of John Paul II's blood.

The ceremony will be attended by Costa Rican Floribeth Mora, whose claim to have been healed from a brain aneurysm by praying for John Paul's intercession was accepted as one of the two "confirmed" miracles normally required for sainthood.

The pontiff, who reigned from 1978 to 2005, was credited with performing another miracle just six months after his death, when a French nun said she had been cured, through prayer, of Parkinson's — a debilitating disease from which he had also suffered.

Francis approved the canonization of John XXIII (1958-1963) — with whom he shares a kindly demeanour and reformist views — based on just one supposed miraculous healing, saying that the late pope was so widely adored that he did not need a second one.

The unparalleled double ceremony is seen by Vatican watchers as an attempt to bridge a traditional left-right divide in the Church, but has drawn criticism from some who argue the canonization process was rushed.

Though becoming a saint is usually an expensive and lengthy process that can take decades, John Paul II's elevation has been the fastest since the 18th century when the current canonization rules were installed.

Polish Karol Wojtyla was an immensely popular pontiff with huge charisma, credited with helping bring down Communism in eastern Europe. He was nicknamed the "Pilgrim Pope" for his globe-trotting which took him to 129 countries, clocking up 750,000 air miles.

He survived an assassination attempt in 1981 and his bloodstained clothing has been venerated by thousands in the run-up to the canonization.  But he alienated many left-wing Catholics with his conservative stance, particularly in Latin America, and has been blamed for hushing up child sex crimes that began to come to light during his pontificate.

He is accused of having protected "Legion of Christ" founder Father Marcial Maciel, a Mexican sexual predator and drug addict who abused male seminarians as well as the children he fathered with different women.

Vatican spokesman Federico Lombardi has strenuously denied John Paul II knew about the abuse and has brushed off critics, saying "being a saint does not mean having done everything perfectly all one's life."

Asked about the crackdown on the leftist Liberation Theology movement, which was seen by conservatives as being "Marxist", Lombardi admitted that "some debatable decisions" were taken during John Paul II's reign.

Fellow saint-to-be "Good Pope John", born Angelo Roncalli, made his name by calling the Second Vatican Council (1962-1965) which overhauled the Church's rituals and doctrines and reached out to other faiths.

When he was the Vatican envoy to Turkey he was credited with saving thousands of Jews during World War II.

Devotees are expected to flock to see his body in the Vatican, where he lies in a glass coffin.

Access for the ceremony itself will only begin in the early hours of Sunday, with crowds of faithful — many of them from Poland — expected to arrive by plane, train and boat overnight, before settling down with sleeping bags on the square to ensure a good view.

The Vatican's official bureau for pilgrims said 4,000 coaches bearing pilgrims would be arriving in the run-up to the 10am mass, while other faithful will watch the canonization in 3D at cinemas across the world, from Argentina to the United States.