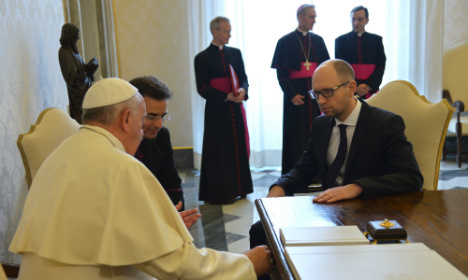 "He can't stay because of the situation", Olga Lappo said as the prime minister met with Pope Francis, amid rising tensions between pro-Russian protesters and Ukrainian authorities in the eastern part of the ex-Soviet country.

The threat came amid heightened tensions on the ground as the Ukrainian military launched a new offensive to besiege the rebel-held city of Slavyansk and insurgents blew up an army helicopter with a rocket-propelled grenade.

At the entrance to Slavyansk, several members of an OSCE observer mission were detained and taken to the rebel-held security services building, sparking immediate international condemnation.

"Given the absence of progress, we have to think about — and not just think about, but act on — the option of new sanctions," Merkel said.

"For this purpose, European Union foreign ministers will meet as soon as possible."

The United States and the European Union have already targeted Russian President Vladimir Putin's inner circle with visa and asset freezes and imposed sanctions on a key Russian bank.

Western leaders have repeatedly threatened to hit Russia with measures aimed at the wider economy.

"The heads of state and government have called for a rapid reaction by the G7 and raised the prospect of new sanctions by the international community against Russia," the French presidency said in a statement.

The leaders called on Russia to stop its "intimidation" of Ukraine and stressed that a presidential poll scheduled for May 25 was "essential" to stabilise the country.

The White House added that Moscow could "still choose a peaceful resolution to the crisis" by implementing a deal struck in Geneva last week to defuse the tension.

Meanwhile, Ukrainian authorities ratcheted up military operations against pro-Russian rebels in the east and their Cold War-style rhetoric.

"Russia's support for the terrorists in Ukraine constitutes an international crime and we call on the international community to unite against the Russian aggression."

Nevertheless, deputy foreign minister Danylo Lubkivsky told reporters at the United Nations that Ukraine would exercise restraint in its operations against pro-Russian separatists.

"The anti-terrorist operation is ongoing, but we are guided by one major idea: we would like to avoid any victims or casualties," he said.

Kiev announced that its forces were now seeking to "blockade" rebels inside Slavyansk, in a bid to prevent militant reinforcements from arriving and to spare civilian casualties.

An AFP journalist saw heavily armed troops setting up a checkpoint some 15 kilometres from the town of 110,000 people.

On Thursday, Ukrainian armoured vehicles and commandos had made a brief but dramatic incursion into Slavyansk, killing a 22-year-old insurgent.

But the rebels in Slavyansk were defiant Friday, vowing: "We will not surrender the town."

Only 16 kilometres to the south, at an air base close to the city of Kramatorsk, a rocket-propelled grenade blew up a Ukrainian military helicopter sitting on the tarmac, officials in Kiev said.

The pilot escaped but was wounded.

Russia responded to Ukraine's military offensive by ordering its troops massed on the border to launch new drills.

Russian Foreign Minister Sergei Lavrov claimed Kiev's offensive was part of a US plot to "seize" Ukraine for its own "geopolitical ambitions and not the interests of the Ukrainian people".

Later on Friday, the foreign ministry called for an "immediate stop to all military action and violence, for the retreat of troops and the full implementation of the Geneva accord by Ukraine".

In a sign of the increasingly desperate efforts to prevent the conflict spiralling out of control, German Foreign Minister Frank-Walter Steinmeier warned: "There is not much time to end this madness."