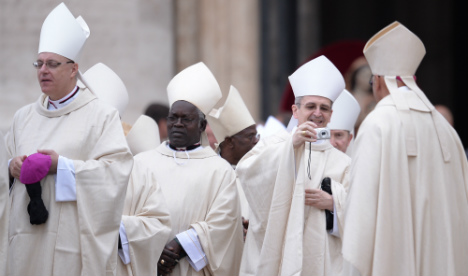 Pilgrims attended vigils and camped out in the Eternal City ahead of a ceremony seen as a way of uniting conservative and reformist strands of Catholicism.

Francis will co-celebrate the open-air ceremony from 0800 GMT with pope emeritus Benedict XVI and hundreds of bishops and cardinals gathered near the altar, under giant tapestry portraits of the two late pontiffs.

"This is very emotional!" said Luigi Villa, a 77-year-old from John XXIII's hometown of Sotto Il Monte in the foothills of the Italian Alps, who queued from the early morning with a group of some 140 townspeople.

A giant Polish flag lifted by balloons could be seen floating over St Peter's Square and a Polish youth brass band tuned up ahead of the grand mass.

Maria, a 20-year-old from Mexico, said: "I am very tired. I haven't slept but I am very excited!"

Francis has reached levels of popularity not seen since the glory days of John Paul II but Vatican experts say he is more comparable to John XXIII — a down-to-earth unifying figure with the style of a parish priest.

By sainting them together, Francis "is speaking not just to the outside world but to rival camps within the Catholic fold who see John XXIII and John Paul II as their heroes", said US-based Vatican expert John Allen.

The ceremony will be relayed in different languages on giant screens around the city including at Fiumicino airport, the Colosseum and Piazza Navona.

It is also being shown in 3D at hundreds of cinemas across the world from Francis's native Argentina to Lebanon and is being live tweeted by the Vatican's vicariate of Rome under the hashtag #2popesaints.

The Vatican said 98 foreign delegations were attending including former Polish president and Solidarity leader Lech Walesa and the kings of Belgium and Spain.

Zimbabwean President Robert Mugabe is also expected — despite a ban from entering the European Union, which does not apply in the sovereign Vatican state.

Ukrainian Prime Minister Arseniy Yatsenyuk had been scheduled to attend but was forced to cut short his trip after meeting with Pope Francis on Saturday because of the spiralling tensions in his country.

There were 10,000 law enforcement on patrol and the civil protection agency has 3,500 volunteers on hand, including 25 Polish cultural guides and 20 psychiatrists trained in dealing with panic attacks.

The Vatican also deployed a smartphone app called Santo Subito! (Sainthood Now) — the phrase chanted by the crowd at John Paul II's funeral —  with practical tips for pilgrims and famous quotes from the two pontiffs.

The Vatican's official bureau for pilgrims said 4,000 coaches bearing pilgrims were arriving, along with special trains bringing the faithful from around Europe.

A Polish marathon runner jogged 2,000 kilometres (1,243 miles) to Rome in six weeks and a German vintage car collector drove in on a 1958 Polish-made car that once belonged to Karol Wojtyla before he became John Paul II.

The Polish pope (1978-2005) was the first Catholic leader to be a media superstar but he drew sharp criticism for his clampdown on leftist movements in the Church and his failure to tackle child sex abuse.

The acceleration of his sainthood cause, which has been the fastest since the 18th century when the current rules were adopted, has also proved controversial.

Francis also sped up John XXIII's sainthood cause, granting it with only one supposed miracle to his name instead of the two usually required for canonisation.

As a Vatican diplomat, Angelo Roncalli has been credited with saving thousands of Jews during World War II and he campaigned against age-old Catholic prejudices against Jews after being elected pontiff.

But he is best remembered as the driving force behind the Second Vatican Council, which overhauled arcane Church rituals and doctrines including allowing mass to be celebrated in languages other than Latin.