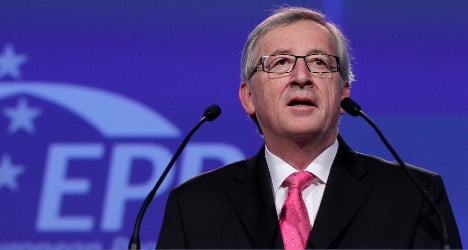 "The recent statements made by Mr. Berlusconi have sickened me," said Juncker, a former Luxembourg prime minister who is a member of the same umbrella centre-right European People's Party as Berlusconi.

"I call on Mr. Berlusconi to withdraw his statements immediately and to apologize to the survivors of the Holocaust and to the citizens of Germany," he said in a statement.

"There is no place in European politics for divisive statements betraying the values on which our [European] Union is based."

Campaigning on Saturday for the May 25th European elections, Berlusconi claimed that Germans denied the existence of Nazi concentration camps. He made the comments while attacking Juncker's main opponent, German Socialist Martin Schulz, who is current president of the European Parliament.

Berlusconi notably referred to an incident in 2003, when he infamously said Schulz would make a good 'Kapo,' the notorious concentration camp guards, in a film being made in Italy.

"There are some things one does not make fun of," Juncker said, recalling the "terrors experienced during the Holocaust that cost millions of innocent lives."

He said Berlusconi's attacks on Germany were unacceptable, saying Berlin had done everything possible to help fellow EU member states through the global slump and debt crisis.

Juncker is the EPP's official candidate to head the European Commission, the EU's executive arm, when current president Jose Manuel Barroso steps down later this year.

He has the backing of German Chancellor Angela Merkel while the EPP is currently the single largest group in the European Parliament, a position it is expected to hold after the polls.

Both Juncker and Schulz are scheduled to take part on Monday in the first televised debate of candidates for the president of the Commission, along with liberal candidate Guy Verhofstadt and Greens candidate Ska Keller.