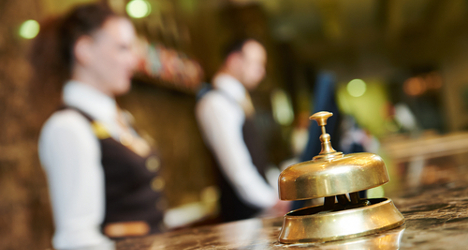 Hotel staff said the student could not work on the reception desk while wearing a headscarf. Hotel photo: Shutterstock

Seventeen-year-old Omaima Razzag, a student at a local tourism college, had planned to spend three weeks working at the hotel reception in the town of Cattolica, in the coastal province of Rimini, Tgcom24 reported on Monday. But the hotel staff said that in order to complete her internship, Razzag would have to take off her veil.

“They had decided that the work experience students must behave and dress in a certain way. They would only accept me if I took the veil off. I said I absolutely wouldn’t,” she told local journalist Brahim Maarad.

“Our task is to be welcoming. A cappuccino served with a smile is the best, with a veil you can’t see a smile,” the hotel director was quoted in Tgcom24 as saying. The comments appear to show that the hotel staff believed Razzag wore a niqab or burqa, Islamic veils which cover the mouth, whereas photographs published online show the smiling student wearing the Muslim hijab.

“They discriminated against me before seeing my ability and competence, just because of my headscarf that is a fundamental sign of my faith and cultural identity,” said Razzag, who instead completed work experience at a municipal building in the Rimini area.

The regional president of hoteliers association Federalberghi, Sandro Giorgetti, agreed that the hotel staff had taken the wrong decision. “It was a mistake to prevent this girl from doing her internship,” he told Tgcom24.