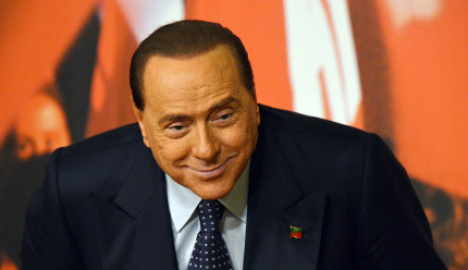 Silvio Berlusconi was convicted of fraud last year but was allowed to opt for community service instead of prison because of leniency for convicted over-70-year-olds. Photo: AFP/Gabriel Buoys

Paolo Pigni, head of the Catholic-run Fondazione Sacra Famiglia near Milan, told a press conference "the former prime minister will arrive on May 9th" and work in the part of the centre dedicated to caring for people with dementia and Alzheimer's disease.

The media magnate — who has been ordered to work at the centre for disabled and elderly people one day a week for at least four hours — will help out with a morning programme including motor activities, reading, writing and games, Pigni said.

"Berlusconi will not take part in fun or relaxing activities, nor will he spend time in an office," Pigni said, adding that the 77-year-old would find himself dealing with "situations of suffering which can enrich him".

The director stressed that "at Sacra Famiglia, neither Silvio Berlusconi nor anyone else will be able to work on electoral campaigns."

Berlusconi has invaded television screens and radios over the past few days in a frenzied bid to draw media attention to his centre-right Forza Italia party's campaign for the European elections.

The billionaire was convicted of fraud last year but was allowed to opt for community service instead of prison because of leniency in Italy for convicted over-70-year-olds.

Comments he made this week mocking the community service as "ridiculous, not just for me but for the country" may result in a warning from the judicial system according to Italian media reports, which said continued outbursts could see him end up under house arrest.