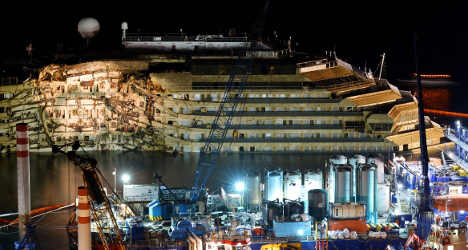 The mammoth project to refloat the doomed Costa Concordia cruise ship has been suspended until a decision is made over which port will scrap the wreck, Italian media said Wednesday.

The ship's owner Costa has decided temporarily to halt the unprecedented project to float the 290-metre (951-foot) long vessel, over environmental concerns raised by the body charged with overseeing the salvage, according to reports.

Italian ports are fighting off competition from Turkey to scrap the Concordia, which sank off the Tuscan island of Giglio in 2012, leaving 32 people dead.

If Turkey does win the bid, the wreck would be carried there aboard the world's largest semi-submersible ship, the Dockwise Vanguard.

Local daily Corriere Fiorentino said in that case, the contents of the Concordia — a potentially polluting cargo of gallons of cleaning products, rotted food and sewage — would have to be pumped out to ensure the vessel's stability, with a potentially grave impact on the surrounding environment.

The works have been stopped due to a lack of information about "one of the hypotheses for removing the wreck: the Dutch ship Vanguard," Girotto said.

Italy's civil protection agency said this month that Turkey may be the best option for a dismantling operation which will be paid for by the ship's owner Costa, Europe's biggest cruise operator, which it said had already spent €1.1 billion on the salvage operations.

Giglio is part of the Tuscan Archipelago National Park, which claims it is Europe's biggest marine sanctuary with a protected area of 56,800 hectares (140,0400 acres) of sea and 17,900 hectares of land.

POST
Why sending parcels between the UK and Italy is more expensive after Brexit
Url copied to clipboard!