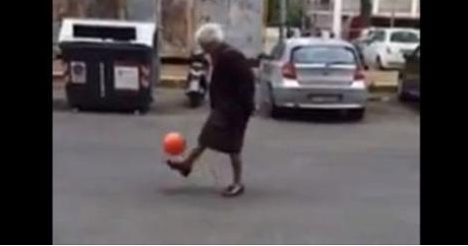 The video was shot in the outskirts of the Italian capital. Screengrab: Leggo

Dressed in a long black skirt and cardigan, the woman shows that age is no barrier when it comes to Italy’s most popular sport as she dribbles and kicks a football with some children on the street.

For now the identity of the sporty elderly woman remains a mystery, but she has already become something of an internet sensation.

Within a few hours of being posted on Facebook, the video had clocked up over 5,000 views, Il Messaggero reported.

All that is known of the woman – who is referred to as “la nonnina” (the little granny) in the Italian press – is that she is probably from Rome, which is the location of the video.

Watch the video, published on the Leggo news website on Monday, for yourselves below: