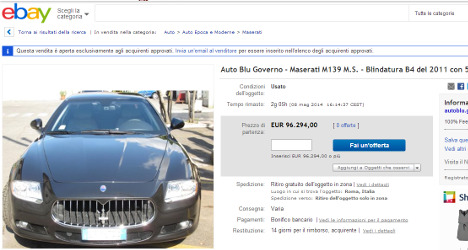 The cars, which were put up for sale by Italy’s defence ministry on the auctioning website on April 28th have been described in the media as the stars of the government’s collection.

The government had hoped to raise almost €1 million from the sale of the luxury cars, but with three days left until the auction closes, this is looking increasingly unlikely.

The cars sold were being used by the police, the fire brigade and the defence ministry and included five BMWs and two Audis, the government said in a statement.

A total of 151 chauffeured cars were hoped to be auctioned off by May 16th in an initiative that has gained broad public support and was launched by centre-left Prime Minister Matteo Renzi shortly after coming to power in February.

The government said the official cars chosen for sale were "those that the public administration retains no longer essential for institutional ends".

As Italy struggles to recover from a painful two-year recession, national and local authorities have been forced to cut down on thousands of official cars known as "auto blu" (blue cars) that have been for decades one of the many perks for the political class.