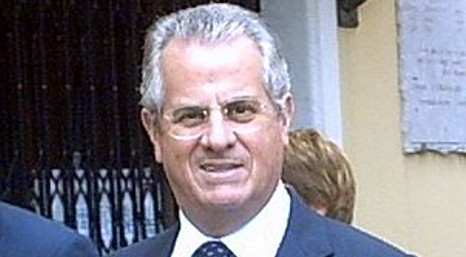 Claudio Scajola was arrested at a Rome hotel on Wednesday night. Photo: Wikipedia

Claudio Scajola has been arrested in Rome for allegedly helping Amedeo Matacena, a Calabrian businessman escape a five-year jail term after his conviction for mafia association was handed down last year, Corriere della Sera reported on Thursday.

Berlusconi said he was "pained" to hear about Scajola's arrest but did not know what the reasons behind it where.

He added Scajola, 66, was was left out as a candidate for the party's run in the upcoming European elections, "not because we feared his arrest, but because a survey found that he would have lost us votes."

Claudio Scajola, who held top posts including serving as interior and industry minister under successive Berlusconi governments, has long been dogged by scandals.

He was forced to resign in 2010 over allegations that he bought a luxury flat next to Rome's Colosseum with bribes but was later cleared after claiming he did not know it was being paid for by someone else.

In 2002 he resigned as interior minister after being caught in a wire-tap vilifying Marco Biagi, a government consultant on labour law who had been assassinated by the extreme-left Red Brigades shortly after Scajola had taken away his police escort.

Matacena is still in Dubai and fighting extradition.

Scajola and others "assisted businessman Matacena in hiding his assets and helping him flee abroad", anti-mafia prosecutors in Reggio Calabria in southern Italy said in a statement.

Police arrested Scajola at dawn in a Rome hotel and conducted raids across Italy, seizing assets worth around €50 million.

Meanwhile, a Palermo court last week rejected an appeal against an arrest warrant issued for Marcello Dell'Utri, another former aide to ex-premier Silvio Berlusconi, paving the way for his extradition back to Italy where he faces charges over mafia ties.

READ MORE HERE: Dell'Utri appeal over arrest rejected
Dell'Utri headed up the advertising arm of Berlusconi's media business empire and helped his political debut with the foundation of the Forza Italia party in the early 1990s.
Don't miss a story about Italy – Join us on Facebook and Twitter.