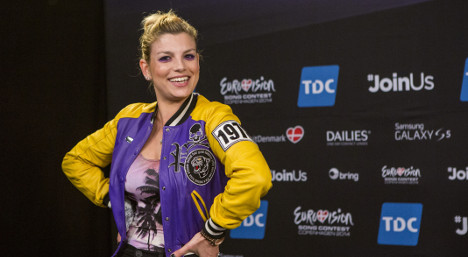 Emma Marrone will represent Italy in the final of the Eurovision Pop Contest in Copenhagen on Saturday. Photo: Nikolai Linares/AFP

This probably comes as no surprise seeing as Italy has always been a fickle participant in Eurovision: the country has pulled out of the contest five times in its 58-year history due to lack of public interest – although in 1981 it was because the song clashed with a political referendum on divorce – making its most recent comeback in 2011 after a 14-year absence.

“I don’t even know what Eurovision is, do you mean the San Remo festival?”, Alessandro, a bar owner in Rome asked The Local, referring to the popular music festival that takes place in the northern Italian coastal town each year.

In fact, over the years, many winning songs and artists at San Remo have gone on to represent Italy at Eurovision.

Francesco, the 58-year-old owner of a dry cleaners in northern Rome, was equally as confused, telling The Local that Italians had more pressing concerns that even singing won't alleviate.

“I’ve never heard of it. A singing competition? Us Italians have more important things to worry about, like the state of our politics and economy: every day it gets worse,” he said.

Despite the ambivalence, The Local did manage to find a few Italians who were keen to see one of country’s most popular artists, Emma Marrone, do well at the competition’s final in Copenhagen on Saturday.

Said to be a fan of the British pop group Take That, Emma, who came second at the San Remo festival in 2011, will take to the stage to sing La Mia Città.

“She’s really popular in Italy so I’d like to see her do well.”

The 30-year-old was Italy’s biggest selling singer in 2013 and she fended off competition from counterparts, including Raphael Gulazzi, Nina Zillia and Marco Mengoni to take part, but there has been scant sign of interest from the Italian press since the broadcaster RAI announced in January that she would represent Italy in the final.

That was until Thursday, when she made the news after a glimpse of her underwear was caught on video during rehearsals in Copenhagen.

Luciana, a 64-year-old who runs a beauty salon in Rome, said she’ll probably watch the show with her family, mainly to see Emma perform. She’s been a fair-weather fan of the contest over the years, and is not expecting too much from the line-up of songs.

“I’ve seen the adverts on the television and there’s always this big anticipation…but then you watch it, and the songs are always crap.”

Italy has made the top 10 in the contest each year since returning in 2011, although none of the songs were successful in the Italian charts.