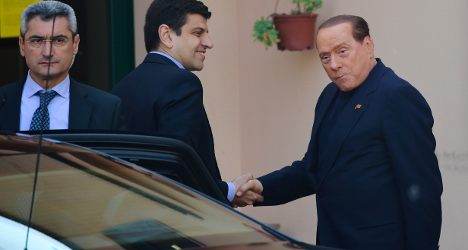 The billionaire tycoon, who was convicted last year and has been expelled from parliament, has been ordered to work four hours once a week for up to a year helping out in a hospice for Alzheimer's patients near Milan.

"To prison!" a trade unionist protester in a clown hat shouted as Berlusconi arrived at the clinic with his security detail in a chauffeur-driven car.

The three-time former prime minister wore a navy blue suit with a badge from his Forza Italia party.

The Catholic Church-run hospice in Cesano Boscone has said it will not allow Berlusconi to use his stint for political grandstanding in front of the world's media and will treat him like any other volunteer. But Berlusconi's presence was anything but normal.

Volunteers working at the hospice said relatives of patients have been requesting visits for Friday to see Berlusconi and even staff from other departments have been asking for transfers to the Alzheimer's section.

Italian media reported that medical workers had been asked not to take photos or videos inside the hospice.

The disgraced politico has dominated Italian politics for two decades and is leading a campaign for European Parliament elections despite being barred from running.

His party is expected to come third with 20 percent of the vote.

Massimo Restelli, head of the hospice's care services, told the La Repubblica daily that Berlusconi's introduction would be "gradual" so that he and the elderly patients can get used to each other.

"It will be small steps so as not to make any mistakes. And then he could do all sorts of things. He could help with meals, which are tricky because sometimes you have to 'remind' the patient that they are eating," he said.

Berlusconi himself has said in interviews that he has a "big surprise" in store and has hinted that this could involve a deeper commitment to Alzheimer's sufferers.

"I think in the end I will stay a lot longer than I have to. I have a big surprise prepared. It took me just 10 days to learn the different cure methods that can be used," the 77-year-old told a radio show.

His 29-year-old girlfriend Francesca Pascale told the Il Mattino daily that he was "not afraid".

But she added: "He does not deserve this".

The sentence is seen as part of a slow-moving disintegration of Berlusconi as a political force, with his Forza Italia party divided by bickering and top allies indicted for mafia ties and corruption.

It was Berlusconi's first definitive criminal conviction and could herald more legal troubles ahead as he appeals a sentence for abuse of power and having sex with an underage prostitute.

He is also a defendant in a trial for bribing a former left-wing senator to undermine a rival party in power at the time.

The tax fraud case has highlighted delays in Italy's justice system since the investigation began back in 2001 with police raids on offices of his media empire Mediaset when he was prime minister.

He was first convicted in 2012 and lost his final appeal last year in a case that centred on fraudulent methods used to purchase film distribution rights in order to avoid paying taxes in Italy.

Berlusconi was sentenced to a year in prison, but a judge ruled he did not actually have to go to jail thanks to lenient sentencing guidelines in Italy for over-70s found guilty of non-violent crimes.

He was also spared house arrest and will only have to do community service for around ten months — as long as he respects a series of restrictions on his movements, including a nightly curfew.

Berlusconi, who has continually protested his innocence, has said he was happy with the community service.

"I'm actually pleased because in my life I have always helped people," he said.