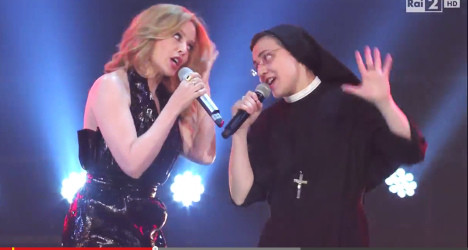 Kylie Minogue was performing her hit single Can’t Get You Out Of My Head with The Voice Italy contestants as a guest star on the popular Italian show. Screengrab: YouTube

Dressed as always in her full nun’s habit, glasses and sensible shoes, the 25-year-old nun once again stole the show – this time with a little help from an international pop star.

Minogue, who is also a judge on the UK’s version of The Voice, was performing her hit single Can’t Get You Out Of My Head with contestants as a guest star on the popular Italian show.

Accompanied by brightly-dressed background dancers, the nun later sang Flashdance’s What a Feeling as part of the ‘Live Show’ – the final stage of the competition.

Sister Cristina Scuccia – known simply as “Suor Cristina” in Italy – was catapulted into fame after auditioning for the show in March with a rendition of Alicia Keys’ hit No one.

A YouTube video of the performance, which clocked up hundreds of thousands of views within days, has now had over 48 million views.

In April the nun blew the audience away in a singing ‘battle’ between her and fellow contestant Luna Palumbo with a rendition of Cyndi Lauper’s Girls Just Want to Have Fun.

Watch the video of Sister Cristina’s performance with Kylie Minogue followed by her solo performance of Flashdance’s What a Feeling.