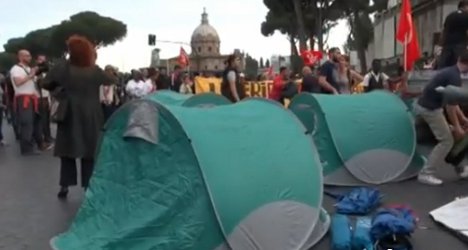 Demonstrators set up camp on the capital’s Via dei Fori Imperiali on Monday afternoon amidst a heavy police presence. Screenshot: Corriere TV

Demonstrators set up camp on the capital’s Via dei Fori Imperiali on Monday afternoon amidst a heavy police presence, following outbreaks of violence at an anti-government protest in Rome last month.

The group set off smoke bombs and chanted slogans calling for more housing rights at the camp, close to Piazza Venezia, before it was dismantled late on Monday night, Corriere della Sera reported.

After meeting with local politicians, including Rome’s Vice Mayor Luigi Nieri and Daniele Ozzimo, the city’s councillor for housing, protesters announced they would march on the Senate on Tuesday.

“We are expecting a discussion on [Infrastructure and Transport Minister Maurizio] Lupi’s housing decree,” Luca Fagiano, from the Movement for the Right to Housing (Coordinamento Cittadino lotta per la casa), told Corriere.

Ahead of the protest, the group said that the government has “ushered in a war against the poor dictated by the European Troika”.

In an online statement, the Movement for the Right to Housing said recent government measures “represent an attack on social and workers’ rights”, criticizing plans to crack down on squatters in the capital.

Thousands of buildings sit abandoned in Rome and have in recent years been transformed by communities into living spaces, which under the government’s new housing programme will be shut down.

The protest group said evictions demonstrated “a real retaliation against those who occupy houses or spaces,” while also hitting out at a multi-million-euro bailout package for Rome and Renzi’s Jobs Act.

In April, dozens were injured during an anti-government protest in the capital, including around 20 police officers and one demonstrator who reportedly lost a number of fingers.