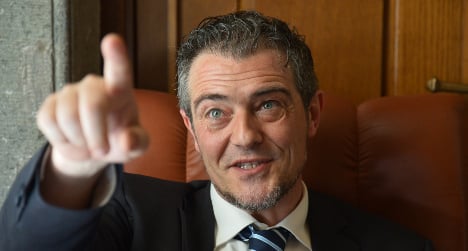 The brash party run by former comedian Beppe Grillo – the origin of the name "grillini" – is predicted to come in second behind the centre-left Democratic Party and ahead of Silvio Berlusconi's Forza Italia.

In the year since they were first elected to parliament in Rome, they have become known for disruptive tactics and media stunts but also for handing back MP perks to protest the costs of Italy's weighty bureaucracy.

They prefer to be called "citizen" instead of "honourable" – the formal title for a member of parliament in Italy – and they frequently receive temporary suspensions for flouting parliamentary rules.

Their activism on social media has proved hugely popular among younger Italians, as have their tirades against the corruption and waste that have permeated local and national governments in Italy for decades.

"I was fascinated by this idea of disruption, this willingness to say 'enough'" Michela Montevecchi, a 43-year-old lawmaker and former teacher with a Bob Marley poster in her parliamentary office, said.

But the "grillini" have also alienated many Italians who voted for them in the February 2013 general election by failing to work together with other parties to pass the kinds of reforms that they advocate.

"On a strictly political level, their record can be nothing but negative. It's a failure because they don't count as a player," said Piergiorgio Corbetta, a political expert specialising in the Five Star Movement.

They have chained themselves up in parliament, staged sit-ins and shouted down political rivals, as well as chasing out dissenters from within their own ranks.

In one particularly heated debate last month, a senator from the centre-right walked over to their seats and gave his opinion of their tactics with a fascist salute.

But the "grillini" themselves say they are the victims of mainstream political parties ganging up against them to preserve the interests of the ruling classes.

After European Parliament president Martin Schulz dismissed the movement as "wind", Grillo unleashed an angry tirade in a blog post comparing him to a Nazi.

"The Five Star Movement is a wind from the south that is about to land in Brussels," he wrote, adding: Schulz "should hold on tight – it could be a hurricane".

Corbetta said that their inexperience and their inefficiency as a parliamentary force meant that the Five Star Movement would inevitably lose momentum.

"Capturing protests is easy but turning this into proposals is harder," he said, admitting however that there was "a lot of room for protest" in Italy.

"Soon, they won't be able to make ten percent," he said, adding that "in five years, they will be gone".

Grillo's movement has already attracted a lot of attention in Europe, including from Britain's Nigel Farage of the anti-EU UK Independence Party.

"Every month that goes by he gets more and more Eurosceptic, more critical of Italy being in the euro. I hope after the election I can sit down with Mr. Grillo, have a glass of wine and talk about things."

The Five Star Movement advocates a referendum on whether Italy should stay in the euro, along with a mix of pro-environment, anti-immigration policies.

It is also calling for the abolition of the European Union's "fiscal compact" of public debt reduction targets, calling it a "diabolical mechanism that will destroy Italy's economy" and reward only big banks.

But its main campaign is against waste of public funds.

While Italy's worst economic recession since World War II ended last year, there is still rampant unemployment and many Italians are finding it hard to make ends meet.

Austerity cuts have hit hard, fuelling anger against the perceived privileges of a political and economic elite linked to the main left and right parties as well as waste and corruption on major public works projects.

"There are a lot of people in Italy who are fed up with this political class. If we don't get working on our own, we can't achieve anything.

"Ours is a peaceful, cultural revolution."