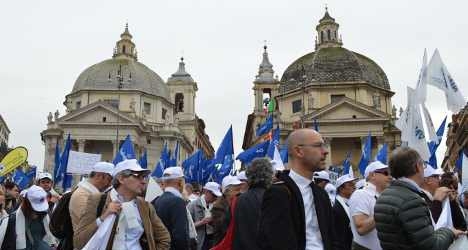 Companies in Rome are burdened the most, paying an average 74.4 percent in taxes, 8.7 percent more than in 2011, according to the data from the CNA, an association representing artisans and small and medium-sized businesses.

The north-south divide seems to make little difference between some areas, with businesses in Bologna and Reggio Calabria falling in the second highest tax bracket, at 74.2 percent, compared to 64.6 percent three years ago, followed by Florence at 74.1 percent.

Businesses in the northern Italian town of Cuneo, in Piemond, pay the least amount of tax at 56.2 percent, followed by Carbonia in Sardinia and Sondrio in Lombardy at 56.9 percent.

The survey covered businesses with an annual turnover of €431,000 across 122 cities and towns.

“Local taxes are taking up an increasingly bigger portion of the total tax rate,” the CNA observed.

An estimated 111,000 Italian companies went bust in 2013, the highest number since 2001, according to figures from the Italy-based Cerved research agency in March.

Italy relies heavily on the success of its 3.7 million small- and medium-sized businesses; according to EU estimates almost half the country’s jobs are in companies with fewer than ten employees.

Thousands of small business owners protested in central Rome in February, calling for greater action to save their firms.