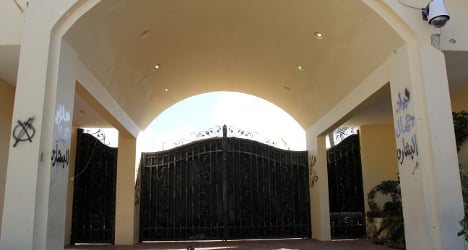 Four people died in an attack on the US consulate in the Libyan city of Benghazi in 2012. Photo: Abdullah Domah/AFP

The contingent of nearly 200 marines is part of a newly-created "crisis response" force set up in the wake of a deadly attack on a US diplomatic outpost in the Libyan city of Benghazi in 2012.

The State Department has requested the move amid growing concerns over violence in Libya, but there was no imminent plan to evacuate the embassy in Tripoli, an administration official said.

"We're seeing a deterioration of the security situation there," the official, who spoke on condition of anonymity, told AFP.

The deployment was ordered as a "prudent measure" due to "the general unrest in Northern Africa," Warren said.

He declined to say if the move was focused on a particular country.

The US troops were drawn from a force in Moron, Spain, the Marine Air-Ground Task Force Crisis Response unit. The force helped evacuate staff from the US embassy in South Sudan last year.

Libya's central government has struggled to assert its authority over the vast, mostly desert country, which is effectively ruled by a patchwork of local militias and awash with weapons.

In March, the authorities acknowledged for the first time the existence of "terrorist groups" in Libya, particularly in Benghazi and in Derna, an eastern city with a history of Islamist militancy.