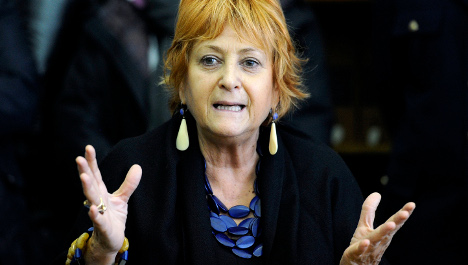 Public Prosecutor Ilda Boccassini received the bullets at her Milan office in April, remarking that they were the latest in a string of threats.

“I received the most recent bullets a few days ago when we decided Berlusconi should do community service,” she was quoted in La Stampa as telling the Superior Council of Judiciary (CSM).

Boccassini and fellow magistrates ordered Berlusconi to do a year of community service in a hospice for Alzheimer’s patients, following his conviction last August by Italy’s highest court. The 77-year-old former prime minister’s age saw him escape a jail term.

Berlusconi has denied the charge and over a number of years professed that his legal woes are the result of a plot against him concocted by magistrates.

He is currently embroiled in other court battles, including allegedly bribing an Italian senator in a bid to bring down the government in 2006.

In June, the billionaire politician’s appeal will begin over a guilty verdict for having sex with an underage prostitute, Karima El-Mahroug, known globally as “Ruby the Heart Stealer”.

Boccassini served as prosecutor in the trial last year and described El-Mahroug as Berlusconi’s “favourite”. The dancer was "part of a prostitution system set up for the personal sexual satisfaction” of Berlusconi, the magistrate said at the time.