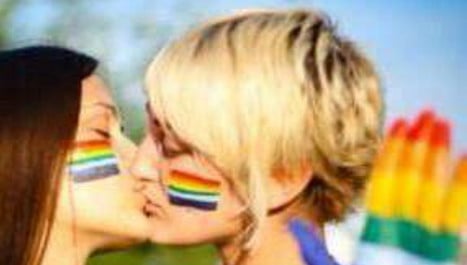 Carlotta Trevisan, a 28-year-old mother of one from Turin, told The Local she was left speechless after the social network blocked her account for three days, but that the move made her and her friends, who have shared the image, more determined to fight discrimination against the lesbian, gay, bisexual and transsexual (LGBT) community.

Trevisan posted a photo, featuring a lesbian couple, with rainbow flags painted on their cheeks, kissing, on her profile page last Thursday to mark International Day Against Homophobia, which took place on Saturday.

She said the photo had been taken from the internet.

While many of her friends on the site responded positively, Trevisan said others took offence, leaving insults, then alerting the network’s operators to the image.

One user commented, “It’s disgusting”, while another said, “take it down, I have young children to protect.”

A few days earlier, Trevisan also posted a photo of two footballers from the Spanish club Sevilla, Ivan Rakitic and Daniel Carrico, who caused a stir when they shared a kiss during celebrations to mark their club's victory in the Europa League final.

Trevisan received a message from Facebook late on Thursday afternoon, saying it had been made aware of the image, which “violated the community's standards on nudity and pornography” and asked her to remove it. When she didn’t, her profile was taken off the site that evening.

The account was restored on Sunday evening, but Trevisan reposted the image.

She added that her determination to rebel against the network has been spurred by Russia’s clampdown on gay rights as well as Italy dragging its heels in adopting an anti-homophobic law.

“This right is a fundamental thing for the LGBT community and it’s incredible that Italy doesn’t yet have this law in place.”

In her fight for gay rights, she says she’s also thinking about her six-year-old daughter.

“I’m thinking of her future,” she added.

Italians don't take too kindly to public displays of affection among the gay community. Last week, it was reported that a lesbian couple are facing trial for an alleged beach kiss.