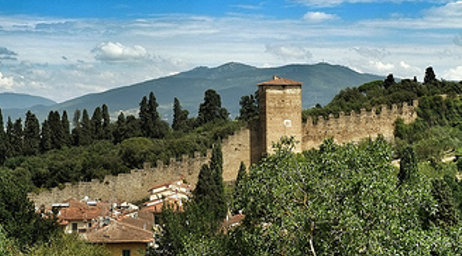 The celebrity pair have rented out the 16th-century Fort Belvedere for a celebration on Saturday with 200 guests, fuelling speculation that this could be their wedding.

"For the Italian state, this is not a wedding," Marco Agnoletti said on Monday.

"To get married in Florence they would have to submit a lot of documents. They haven't made an official request so it can't officially be a marriage," said Agnoletti, a spokesman for the city's interim mayor, Dario Nardella.

"If I've understood correctly, this is a wedding present from him to her. It's a private event" Agnoletti said.

The spokesman said the celebration would bring €360,000 into city coffers and more than half of that money would be spent on restoration work on the building.

Ahead of local elections on Sunday, opposition candidates have criticised Nardella for renting out historic monuments but he has defended the move as a vital source of revenue.

Florence's La Nazione daily reported that the celebrity pair would have a marriage ceremony in France early on the Saturday, before travelling to Italy for the party.

A city council official had earlier confirmed press rumours about a wedding celebration planned for Saturday without specifying that it could not be an actual marriage.