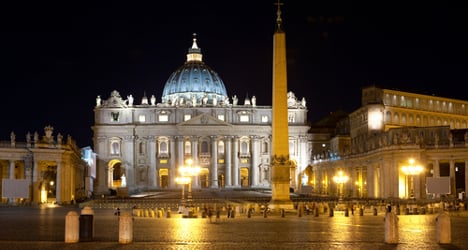 The Vatican bank has 18,900 customers in 2012 and €6.3 billion in client assets. Vatican photo: Shutterstock

"It means that the reporting system starts working, is working," Rene Bruelhart, director of the Vatican's Financial Information Authority (AIF), a supervisory body, said as he presented its 2013 report on Monday.

The agency said that there had been a "notable" rise in reported shady deals at the bank, the Institute for Religious Works or IOR, and that it had so far passed on five requests for further investigation by Vatican justice. In 2011, just one suspicious transaction was reported.

The AIF said that the number of requests for information it had received from foreign authorities had also increased to 28 from just one in 2012 and the number of similar requests it received were 53 in 2013 compared to three in 2012.

"This increase is also due to international cooperation fostered by a series of bilateral agreements we have concluded," Bruelhart said in a statement.

The IOR handles accounts for Vatican departments and employees, as well as for religious orders and diplomats to the Holy See. It has launched a series of reforms for transparency and is closing down suspicious accounts.

Bruelhart, a Swiss lawyer who helped Liechtenstein shed its shady image, was named as Vatican bank supervisor in 2012 and a law adopted in 2013 bolstered his Authority's role.

A former senior Vatican accountant currently on trial for money laundering is accused of moving money through Vatican bank accounts in the past to avoid paying taxes.