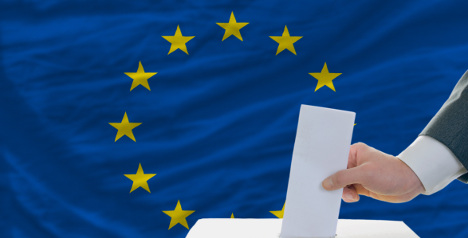 The elections for the European Parliament get underway on May 25th. EU photo: Shutterstock

After three non-democratically elected governments in a row, Dino Gallo, a security guard in Rome, has no faith in Italian politics.

When it comes to the European Parliament elections, which get underway on May 25th, he can so far only hear “noise” surrounding his country’s participation, with party leaders engaging mostly in slanging matches played out in the media as opposed to discussing broader European issues.

Still, he believes it’s important to use his vote.

“Italians are sick and tired of being taken for a ride by politics,” he told The Local, adding that one of Italy’s biggest problems is “the squandering of public money”.

“We pay high taxes, and most of it is robbed.”

But he believes the European Union is something that brings a degree of assurance amid the quagmire at home, and could help in overcoming Italy’s problems.

Rosario Strazzollo, who works for an insurance company, is also planning to vote.

“Even with all the pessimism, the EU is a good thing and is a very important point of reference for Italians,” he said.

“Maybe it can also have an input in helping resolve our problems.”

Their optimism comes despite a report by the Pew Research Centre last week revealing that Italians’ support for the economic bloc has plummeted in recent years.

The run-up to the elections in Italy has so far been dominated by a public showdown between Prime Minister Matteo Renzi and Beppe Grillo, the leader of the insurgent Five Star Movement, whose appeal to a disenchanted electorate is a worrying challenge to 39-year-old Renzi’s government, which was only formed in February.

That worry is well-founded: the latest opinion polls have shown Renzi’s Democratic Party to be in a steady lead but it is followed by the Five Star Movement, which dismayed Europe by winning 25 percent of the vote in last year’s general election, while Silvio Berlusconi’s Forza Italia is in third place.

Renzi is currently touring the country in a bid to drum up support and enthusiasm for the elections.

Italians have nine other parties to choose from, including the Lega Nord (Northern League), Italia dei valori (Italy of Values), L'Altra Europa (The Other Europe) and the Green Italia, and will elect 73 MEPS out of 751 to form the European Parliament.

But it will take a lot for 28-year-old Armando Scardagnallo, who lost his managerial-level job and is currently on a short-term contract at a tailor shop in Rome, to feel engaged.

“It won’t change anything. They only talk, make promises and then do very little. As for the European politicians, they are all of the same ilk.”

Carmelo Brunetta, a businessman, simply said he “can’t be bothered” and that the topic of the elections has not been raised among his social circle.

“There has been absolutely no mention of it on my Facebook wall either,” he told The Local.

Gianluca, a business consultant who asked to be referred to only by his first name, said that “although the EU, which is dominated by Anglo Saxon countries, produces laws that are not suitable for Latin countries like Italy,” he will go to the polls on Sunday because “it is his right”.

He added that without Italy, the European Union would suffer.

“At an economic level Italy has many unique advantages, such as industrial production, design, food, fashion and tourism,” he continued.

“The Anglo Saxon countries in the EU know perfectly well the quality and creativity that Italy brings. So we Italians must vote in the EU parliament – and we mustn’t exit the euro – we can be a leader in Europe, at least of the Latin countries.”